We’ve thrown out the concept of matching individual wines with individual cheeses for this article. The prospect of sitting down and tucking into a hunk of unadorned Feta, then sipping on a glass of Greek red is, to be frank, quite ridiculous: it’s just not how cheese and wine are enjoyed in Greece. In France, perfectly-ripe cheeses are often matched with perfectly-cellared bottles, as a separate course, towards the end of the meal. Not in Greece. Here, you’re far more likely to encounter cheese throughout the meal, as an integral ingredient rather than the main event.

Bearing this in mind, we put together a spread of typical cheesy Greek dishes and opened a raft of good Greek wines and ate and drank as if we were sitting under a pergola in some rustic taverna somewhere on the islands.

The dishes included beetroot salad with crumbled Feta; the classic meze of roasted Feta (a generous slab of barrel-ripened cheese, sprinkled with dried oregano and a slurp of olive oil then put into a very hot oven for 15 minutes and served with crusty bread); Feta spread (cheese mashed up with yoghurt and herbs); prawns and tomatoes baked with Feta; home-made Spanakopita; and Manouri served with honey and toasted walnuts.

The wines we opened represented both the ancient traditions of Greek winemaking and the best of the quality revolution that is sweeping through that country: the latter mob are wines that combine the unique flavour of indigenous grape varieties you’ve probably never heard of with some very smart, thoughtful, modern production techniques. The revolution has been ticking away for a while now, and, thankfully, a couple of far-sighted importers have started shipping some of the best wines to Australia.

Not surprisingly, we found much to love in the flavour combinations of cheese and wine: the sharp, salty tang of Feta, for example, is echoed in the lean, dry austerity of the whites, while the dried oregano and fresh herbs and peppery grip of the olive oil in the dishes we prepared not only enhanced the flavour of the cheeses, but also mirrored the often dusty, unmistakably Mediterranean qualities of the reds.

Since 2007, use of the name Feta in Europe has officially been confined to cheese produced in five regions of Greece under strict regulations. All cheese bearing the name must be made from a blend of sheep (minimum 70 per cent) and goats milk. Salted marinated cheeses similar to Feta have been made in the Balkan countries of the Mediterranean for more than 5000 years and once formed an important staple for nomadic tribes. Feta literally means ‘to slice’, and the name has only been in use for the past century, indiscriminately describing a wide variety of salted cheeses. Many of these are produced by large industrial factories from cows milk which is then bleached to replicate the crumbly white texture of authentic Feta.

Most modern Greek Feta is matured in brine and packed in sealed tins or plastic buckets but prior to the 1960s, Feta was matured in small barrels made of beech wood. The barrel subtly influences the flavour and texture of the cheese through natural cultures growing in the grain of the wood, which also enables oxygen to reach the cheese inside as it ripens. Each newly-assembled barrel is smeared with a fresh salty whey cheese (Myzithra),  and then packed with quarters of fresh white Feta cheese in layers. Sun-dried local sea salt is then sprinkled on top before the barrel is topped up with whey and wheeled away to underground cellars where it will spend the next four months fermenting. The taste of this cheese is a revelation: wonderfully soft and creamy with a milky flavour and soft melting texture it finishes with marvellous herbaceous peppery characters. Comparing commercial and barrel-ripened Feta is like comparing bulk block vacuum-packed Cheddar to traditional hand made cloth bound Cheddar made on a farm.

This popular Greek cheese is traditionally made with cream skimmed from the top of fresh ewes milk and the whey left over after making Feta. The fluffy, fine-textured curds are skimmed off the top of the mixture as it is gently heated, and then drained in long canvas tubes which are slowly twisted to ring out the moisture. Its exceptional fine, buttery texture and rich, slightly sweet, salty flavour is delicious with both sweet and savoury dishes.

The Greek equivalent of Italian ‘Ricotta Salata ‘ this traditional cheese is made using fresh ewes milk and whey left over after making Feta. The use of milk rather than cream means it is less fatty than Manouri. Mythizra is often used as a fresh curd cheese in Greece, but for export it is only found as a semi-hard cheese in a small ball shape. It has a dense, creamy, but brittle texture and salty, nutty flavour and is often used as a grating cheese.

The most commonly found semi-hard cheese in Greece is Kasseri, a close cousin of Kefalotyri. Kasseri is made from stretched, cooked curd using similar principles to Italian Provolone and the best examples are still made from ewes milk and kneaded by hand. Aged for at least a year, the moist smooth waxy texture and mild underlying sweetness is ideal for a true saganaki. 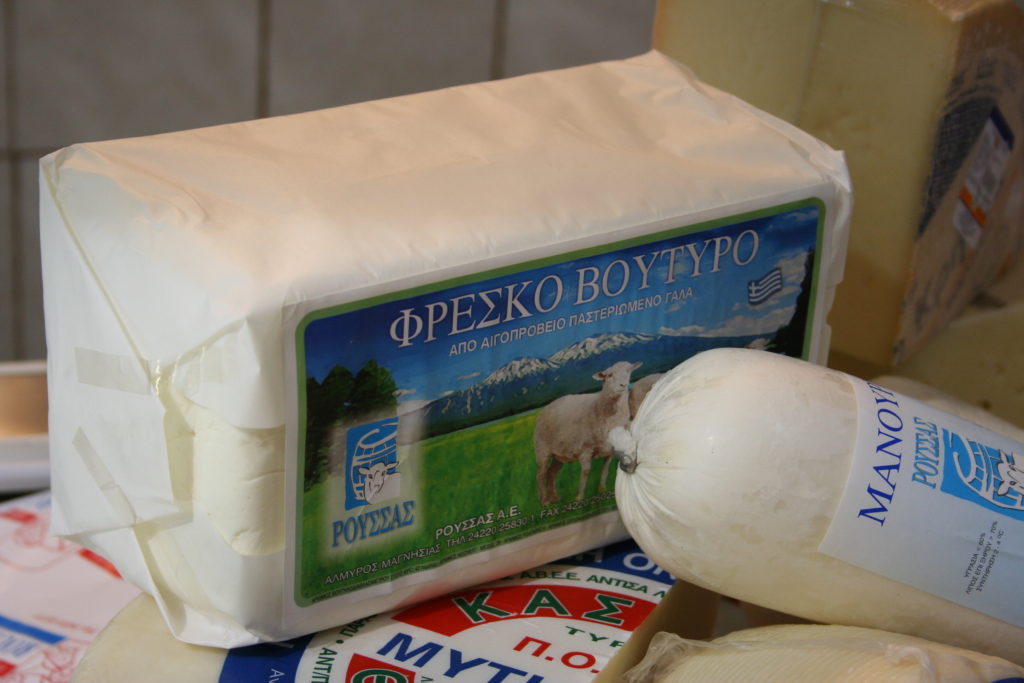 If your perception of Greek white wine is stale Retsina, try a bottle of this from the volvcanic island of Santorini and prepare to be utterly amazed. Made from the local assyrtiko (pron. ‘ass-ear-ticko’) grape by Yiannis Paraskevopoulos of top winery, Gaia Estate , this is very dry, tangy and cutting, with a clean backbone of lime-like minerality. Superb with fish.

Made using obscure local varieties (collectively known as ‘asproudes’) and a splash of chardonnay, this mountain-grown white from leading new-wave winery, Antonopoulos, is marvellously complex and textural – with the honeyed savoury depth of a good Chablis and the perfumed weight of a good riesling.

Antonopoulos Gris de Noir, Patras
The pink-skinned moschofilero is one of Greece’s top grapes and is usually used to make aromatic dry white wines. Antonopoulos turn some of theirs into this intriguing, pale bronze-coloured wine with hints of rose petal aromas and creamy, chewy palate. Excellent with rich, herby cheese dishes.

From right up in the cooler northern region of Naoussa, this earthy, tannic, old-fashioned red is a marvellous example of the better traditional Greek wine style. Made from the xinomavro (pron. ‘ksee-no-mavro’) grape, it has more than a passing resemblance to good nebbiolo – and sang in the mouth with the deep earthiness of the beetroot.

Agiorgitiko (‘ak-hee-ork-hee-ticko’) is Greece’s answer to shiraz – in that it makes everything from simple quaffing reds to some of the country’s sturdiest wines. This is a very good example of a simple varietal wines, showcasing agiorgitiko’s shiraz-like, ripe black fruit and full, savoury tannin grip. Loves the deep flavours of a good spanakopita.

With Gaia Estate, Yiannis Paraskevopoulos set out to make a serious, barrique-matured wine from agiorgitiko that could rub shoulders with the best reds in the world. He’s succeeded: this is simply marvellous, sumptuous, deeply complex and satisfying. Good with cheesy dishes – sensational with some slow-cooked lamb.

Words:  Max Allen and Will Studd