I have a confession to make…

Until I visited Cyprus to film a story for Cheese Slices I thought that Halloumi was simply an innocuous rubbery salty cheese similar to block low-fat mozzarella which only revealed its best qualities when fried or grilled. But after seeing first-hand how it was traditionally hand made in a small farm dairy, and experiencing the wonderful flavours and textures I have become intrigued by why some Halloumi is better than others. 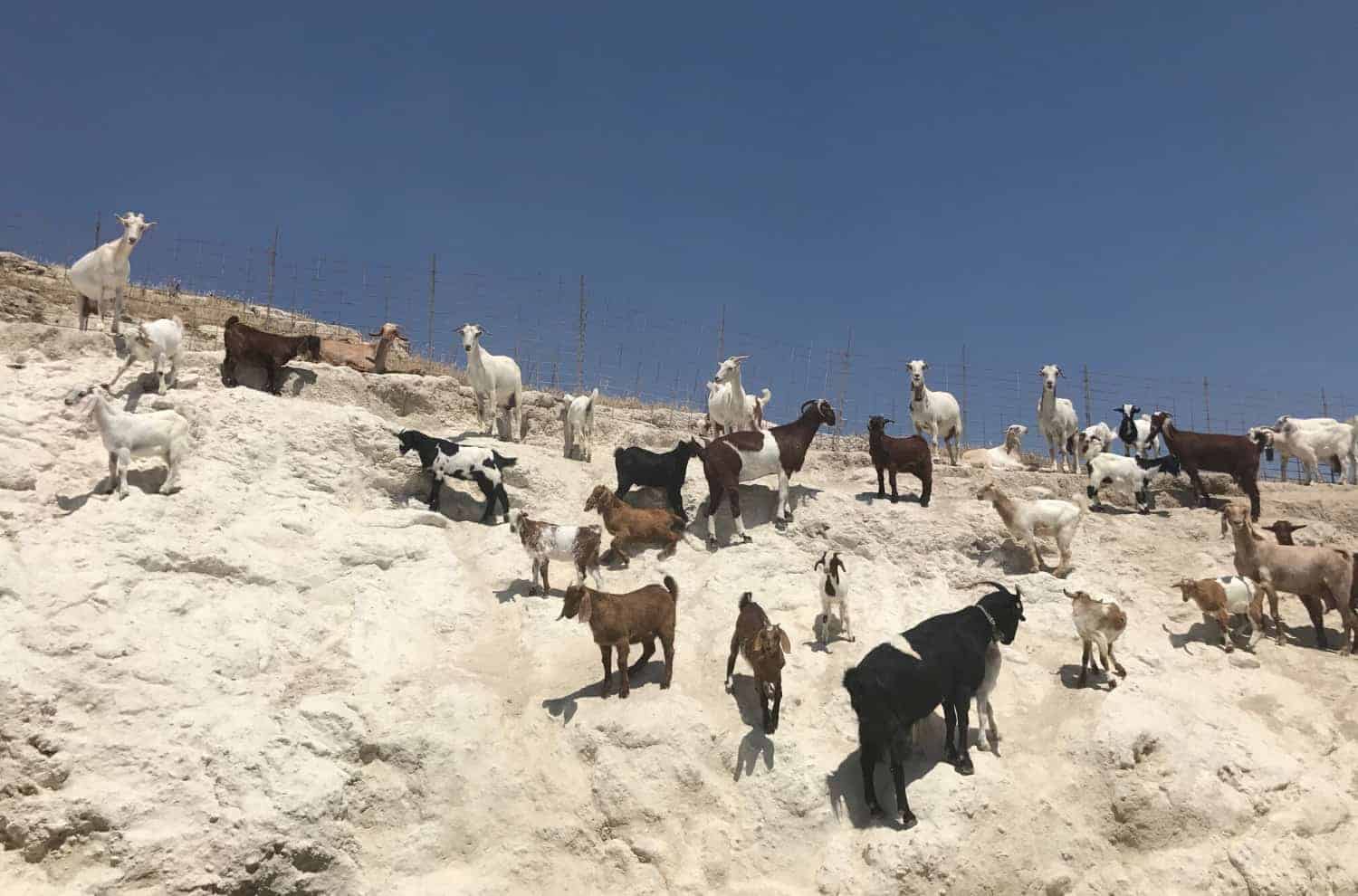 Defining ‘authentic‘ Halloumi is a challenge. The name is internationally recognised, and it is one of only a few cheese types that will hold their shape without melting when heated. It is usually served hot in thin slices with golden brown skin and chewy centre, but can also be grated and used in savoury dishes.  It is the only cheese that has a tendency to ‘squeak ‘ when you bite into it.

In the past two decades, Halloumi has been copied by cheesemakers around the world, and it is often mistakenly linked with the traditional cuisine of mainland Greece, and in some cases even mistakenly associated with stretched curd cheese types such as industrial block Mozzarella for Pizza.  In fact, the origins of this small pocket-sized cheese date back thousands of years to shepherds working in the mountains of Cyprus in the Eastern Mediterranean. Once made only from a seasonal combination of ewes’ and goats’ milk during the spring the principles of how this ancient classic is produced are unique and make a lot of practical sense in a hot dry climate where water is scarce. 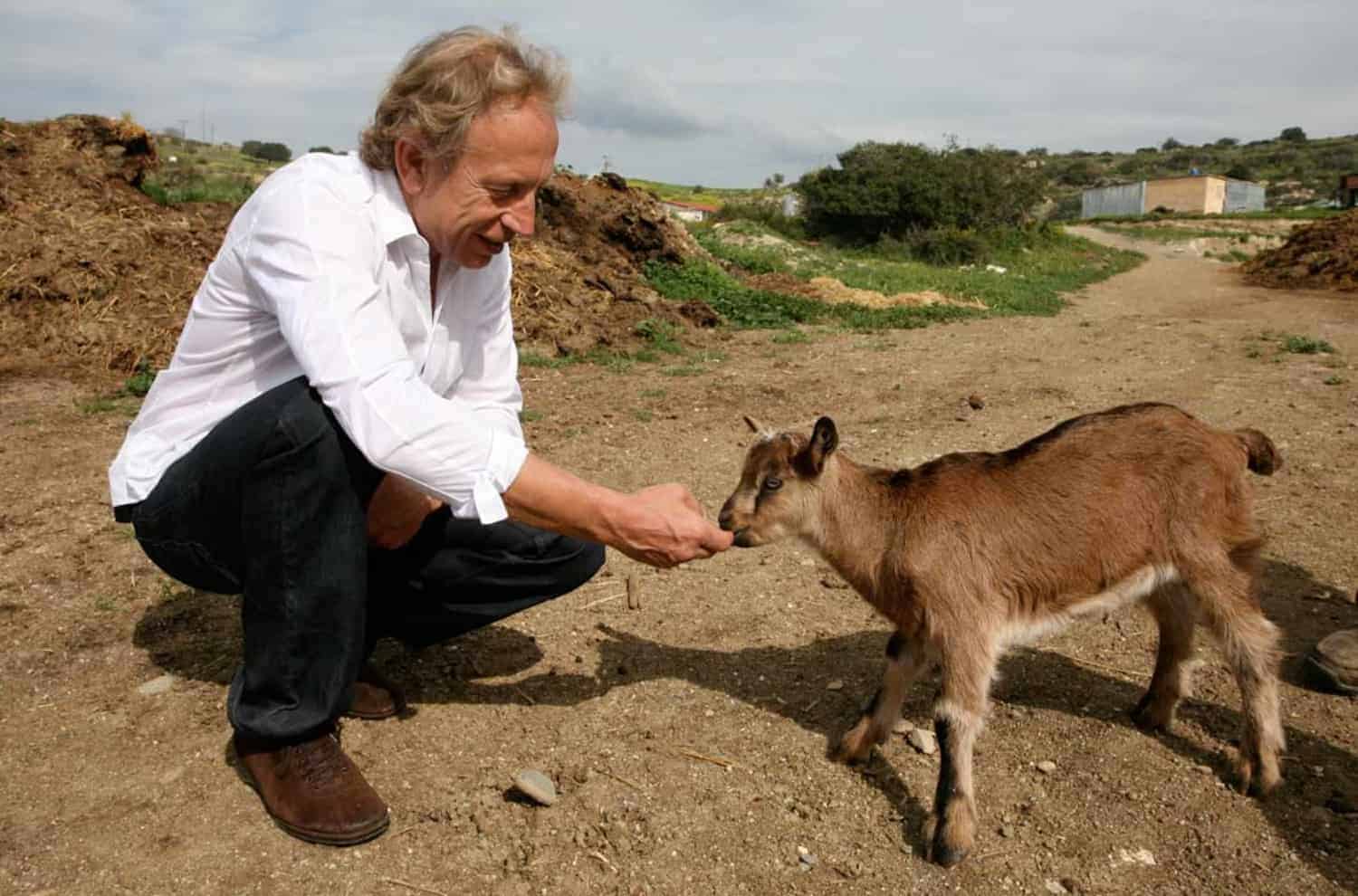 Nothing is wasted. The curds are quickly formed using animal rennet and the leftover whey is carefully used three times. To start with it is heated with milk to make a low-fat whey cheese called Anarie, then small baskets of Haloumi curd are immersed in the hot whey and cooked for up to an hour. Finally, after the warm pliable cheeses are removed and folded in half over dried mint leaves. These not only add flavour but also help with preservation. The whey is then cooled and mixed with salt to cover and cure the cheese for up to a year.

Halloumi is the national benchmark cheese of Cyprus, and is enjoyed throughout the island.  It is known as Haloumi by Cypriot Greeks and Hallum by Cypriot Turks.  But since the island was divided in 1974  production of traditional cheese on small farms has virtually disappeared, and the name and where, and how,  it should be produced has been at the centre of a diplomatic tussle between Greece and Turkey.

There is no doubt that Halloumi was originally produced from ewe’s and goat’s milk, and that this combination depended on the season and region of production. But the introduction of cows to the island during the 20th century enabled large producers to adapt the ‘authentic’ recipe by supplementing cow’s milk as a lower-cost alternative. Disagreement over this practice, and whether cow’s milk should even be used in ‘authentic‘ Cypriot Halloumi resulted in fierce opposition between rival producers, and all attempts to legally protect the name failed. 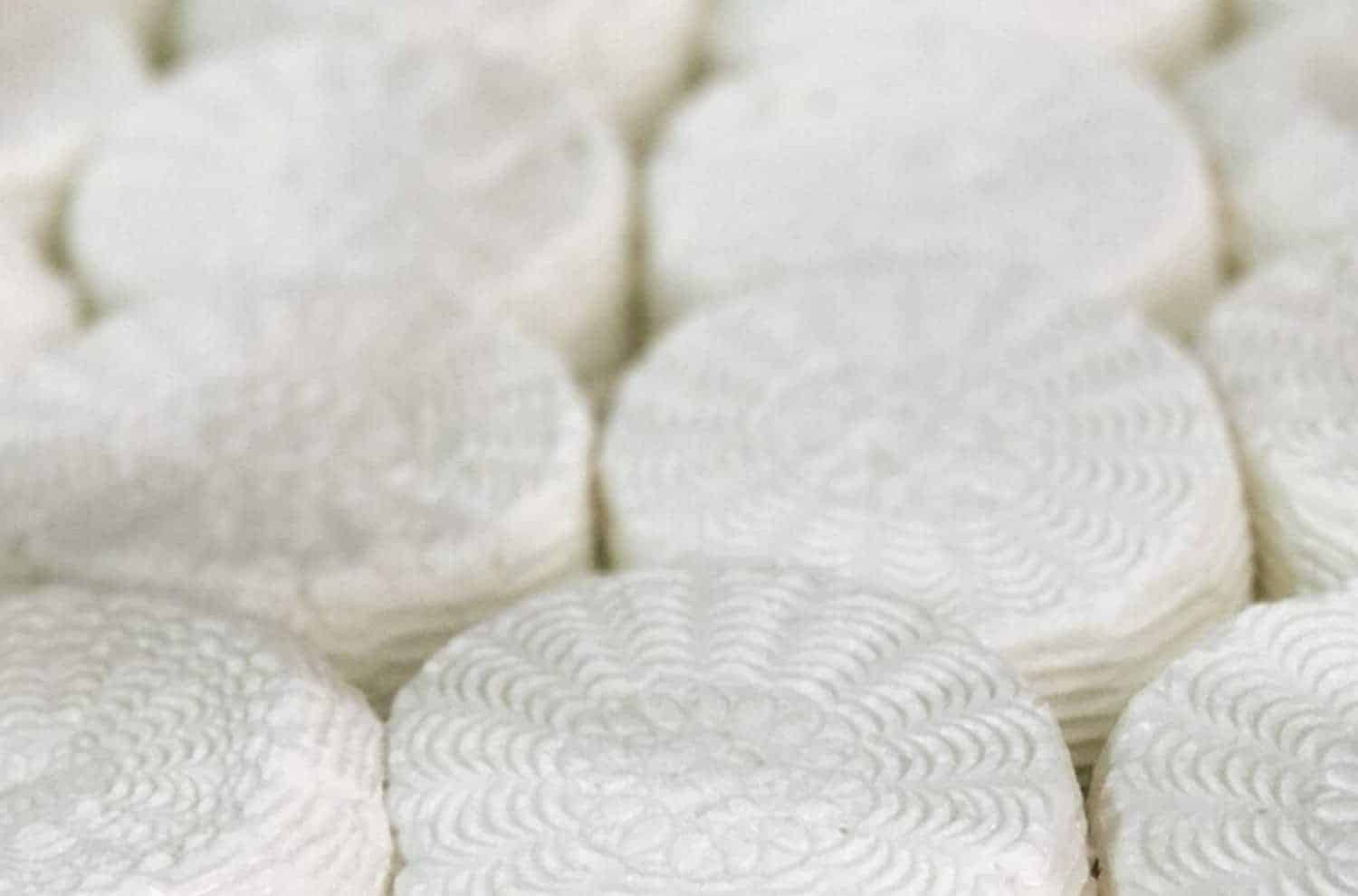 But in 2015 Greek and Turkish producers on the island finally reached a compromise, and agreed that the ratio of goat’s and ewe’s milk in Halloumi /Hallum needed to be more than the amount of cow’s milk in the cheese. An application to register the name under the European PDO system was announced although a shortage of ewe’s and goat’s milk on the island means that these changes will take at least ten years to be finally implemented.

Meanwhile, the name continues to be used by producers outside the EU and there is a confusing difference between the textures and flavours of the many varieties of ‘Haloumi’ found on sale in small vacuum packs in specialist shops.

The genuine hand made cheese is recognisable by its irregular shape and the way it is roughly folded in half, whilst industrial cheese is usually sold in small uniform blocks.

Below is a brief description of the main types and I recommend the best way to decide which you like is to try them all! 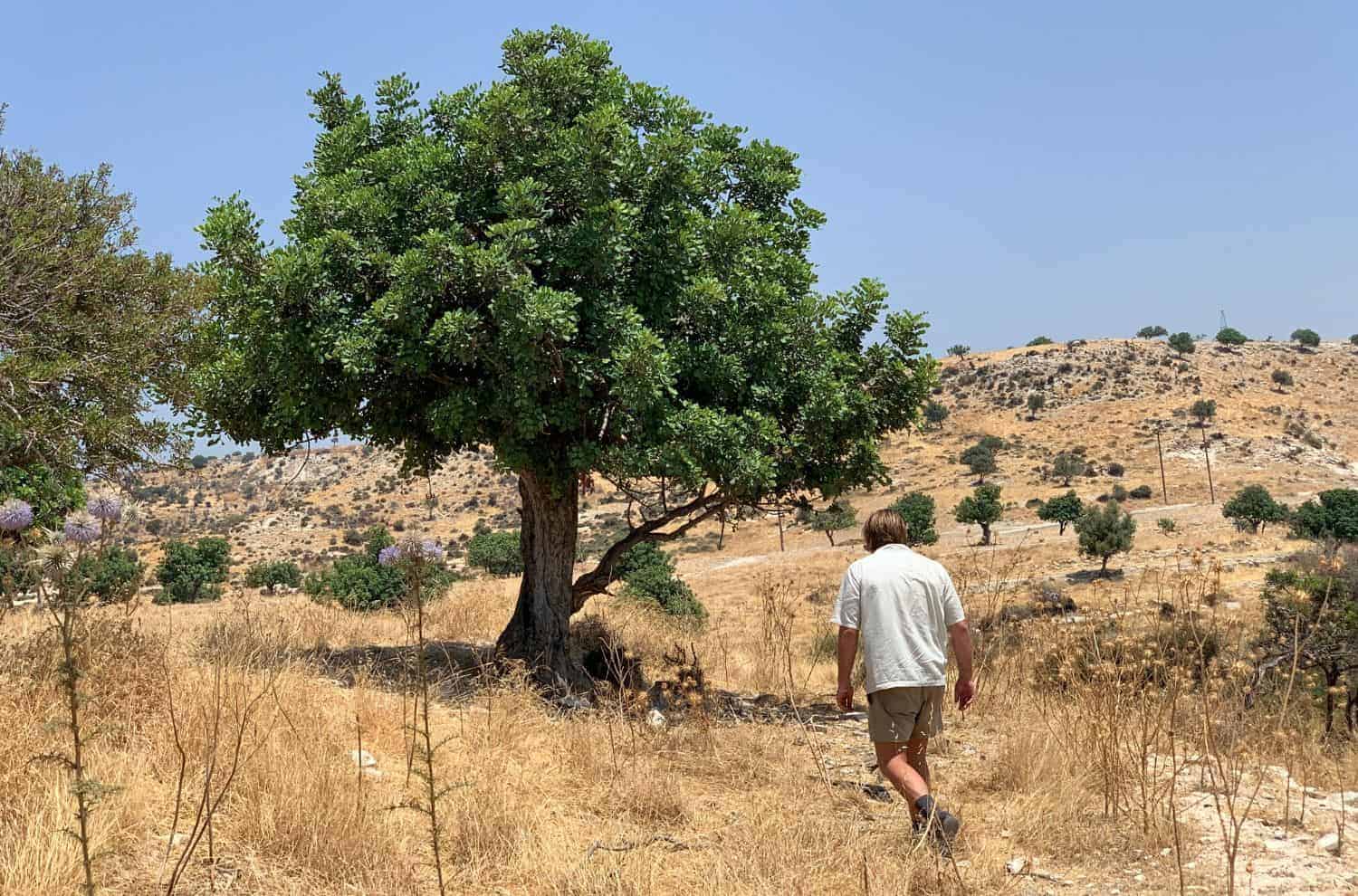 The most popular form of Haloumi contains more than 75 % cow’s milk with just a dash of goats’ and ewe’s milk. This makes it much cheaper to produce than those made from nonbovine milk but generally means less character.  The use of cow’s milk results in a moist rubbery texture and mild milky flavour which has a tendency to be dominated by a salty aftertaste. Cow’s milk Haloumi also has a tendency to squeak.

The ratio of milk used in this traditional Haloumi varies according to seasonal availability but generally includes at least 70 % goat’s milk and 30% ewe’s milk. I think the combination is very important for both texture and flavour and its one of the reasons why Aphrodite Halloumi is so delicious. The rich fatty composition of the ewe’s milk seeps out of the cheese when heated and forms a delicious crispy golden crust, whilst the goat’s milk ensures a firm texture and definitive lingering flavours. 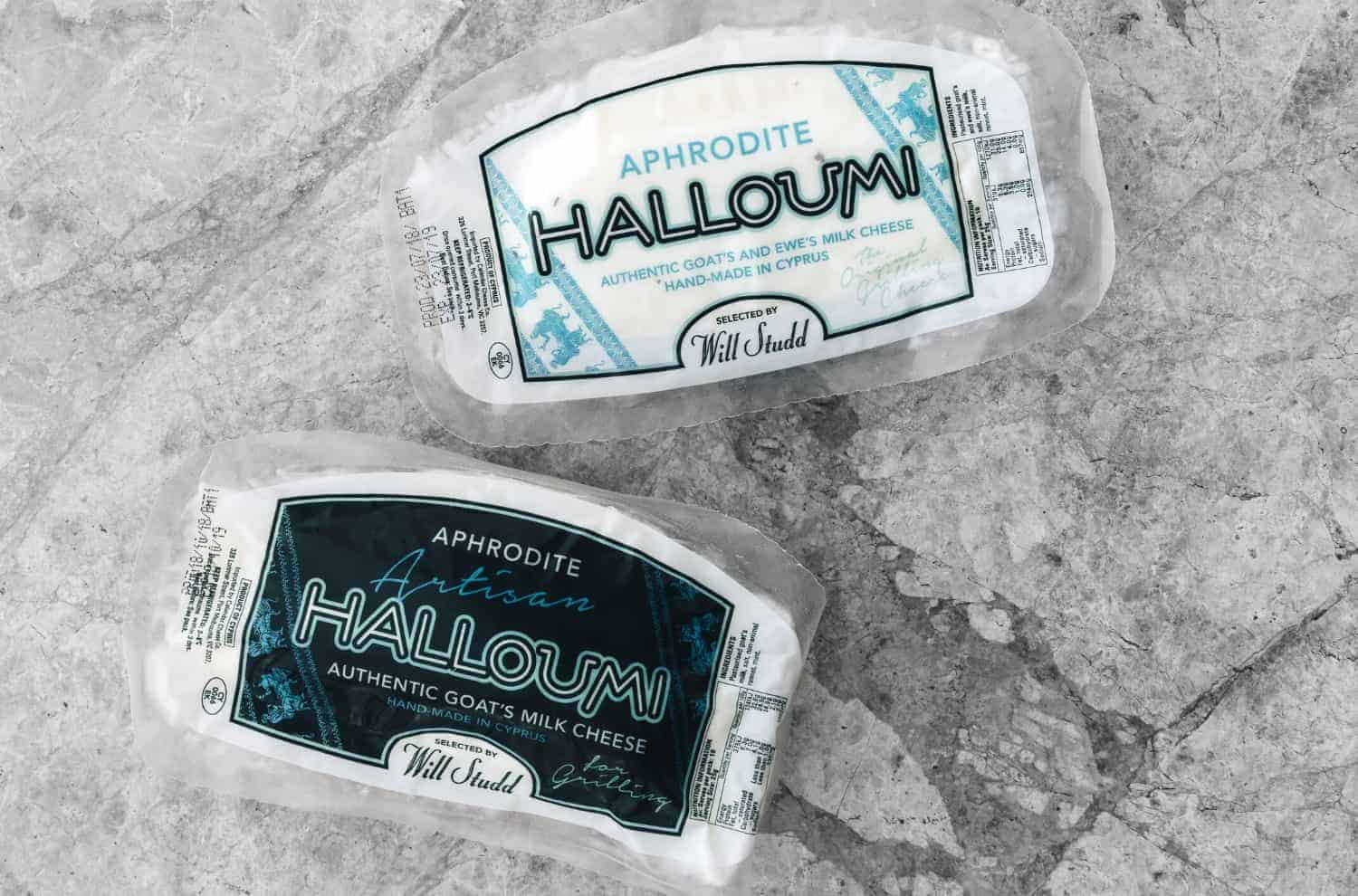 The Damascus Shami dairy goats of Cyprus have long floppy ears and regal noses and look very different as their name suggests have close links with the Middle East. The breed are well suited to the island conditions and their high milk yield has resulted in the production of Haloumi made exclusively from goat’s milk. Firmer in texture than those made from mixed milk this interesting cheese is sometimes known as ‘Village’ cheese‘ and has a pleasantly mild goaty flavour with a slightly salty aftertaste.

This hard to find cheese is usually made from a combination of ewe’s and goat’s milk and is at its best when served straight from the jar. After maturation under brine for up to a year, it develops a semi-hard firm texture and deliciously strong pronounced tangy flavour which is quite different to the young cheese sold in vacuum packs.